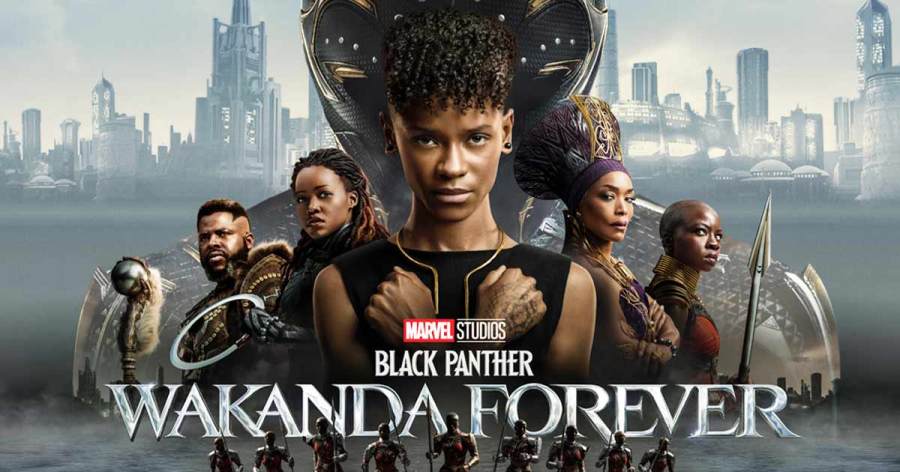 Perhaps the most critically lauded film under the Marvel Studios banner is 2018’s Black Panther as it was widely loved by audiences and critics alike as well as being nominated for seven Oscars, winning three. So, the character of T’Challa, Black Panther and king of the fictional Wakanda, became one of the most beloved and the most culturally important characters to ever be on the big screen. Unfortunately, along with all the other horrible things in 2020, we lost one of the best acting talents and our Black Panther, Chadwick Boseman. Following his death, film goers everywhere wondered how Marvel and the Black Panther filmmakers (most notably the cast and director Ryan Coogler) would tackle this highly anticipated sequel without its lead. I can confidently say Black Panther: Wakanda Forever (2022) is a fantastic, emotional tribute to our late king of Wakanda and an incredible film that is easily among Marvel’s best.

Black Panther: Wakanda Forever (2022) opens with the death of T’Challa to an unknown illness (hauntingly mirror the death of Boseman) and his celebration of life/funeral in Wakanda. As his family and nation grieves the loss of their king, Queen Ramonda (played by Angela Bassett) is pitted against the United Nations as they try to force Wakanda to freely share their Vibranium deposits. As the U.N. desperately searches for Vibranium in order to compete against Wakanda, they accidently come face to face with the underwater Mesoamerican nation of Talokan and their mutant protector, Namor (played by Tenoch Huerta). In retaliation to the U.N., Namor seeks for the scientist responsible for their discovery, a M.I.T. student named Riri Williams (played by Dominique Thorne). In trying to protect Riri, Shuri (played by Letitia Wright), Okoye (played by Danai Gurira), and Nakia (played by Lupita Nyong’o) start a war against Namor and his nation.

With films this good, I prefer to go ahead and get the negatives out of the way. This film had a lot it needed to do in order for it to work: it needed to celebrate Chadwick, it needed to be a catharsis for audiences, it needed to bring the action and incredible performances from the original film, it needed to establish Namor (one of the first Marvel characters ever introduced in Marvel Comics #1 (1939)) and his nation. This film achieves every goal it set out to achieve, however, it required an almost 3-hour runtime and every minute is felt. The one critique that everyone seems to have with this film, in fact, is the runtime and pacing: this movie is entirely too long and by the end of the mid-credit scene, you are mentally and emotionally exhausted. While I loved most everything that was presented on screen, this film needed at least 15 to 20 minutes shaved off in order to fix the dragging pace that plagues the second act of the film.

Another issue I have with this film is the way some of the action is filmed. Throughout the film there are multiple instances where the action is filmed with shaky cam (where the camera moves to try and synthesize the feeling of urgency and movement), and while shaky cam can be an effective tool, I found that when it was employed in this film, I had trouble following what was happening on screen. Another problem I had with the action is the overuse of slow-motion and still frames. In every single action scene in this film, director Ryan Coogler decided use either slow-motion or freeze frames to try and create a “splash page” type moment. While it works to great effect at some moments, by the end of the film I found the overuse of them to be annoying and a big slight to the otherwise phenomenal action set pieces and beautiful cinematography.

The drawn out runtime and the action camera/editing techniques that are poorly used are my only complaints about the film. Wakanda Forever is among Marvel Studios’ best films. The biggest standout for audiences is obviously going to be the performances: there is not a single weak link among its ensemble. This film, obviously, has a Chadwick sized hole, and while his absence is felt throughout, the rest of the cast do an amazing job at picking up the mantle of leading this film. Letitia Wright, Danai Gurira, and Lupita Nyong’o all deliver emotionally resonate and nuanced performances that hit you hard and carry the leading roles of the film. The other Black Panther alumni (Winston Duke, Florence Kasumba, and Martin Freeman) are also great in their very limited roles, and if anything, they are criminally underused. Wakanda Forever also introduces many new actors into the Marvel family. Dominique Thorne as Riri Williams (aka Ironheart), Tenoch Huerta as Namor, and Michaela Coel as Aneka all bring forth incredible new characters that audiences are sure to fall in love with. Huerta’s Namor, in particular, is among one of Marvel’s best page-to-screen adaptations I’ve ever seen: he brings incredible presence and intimidation in every scene he is in and delivers a performance so powerful, he is sure to become a household name and his sympathetic, villainous character is to be a Marvel mainstay that everyone will love. While the entire cast brings powerful and memorable performances, the standout in this film is clearly the great Angela Bassett. Bassett’s performance in this film is incredibly powerful and she has many moments in the film that will emotionally rock you to your core. Coming out of the premiere a few weeks ago, every major outlet was predicting that Bassett is leading the Best Supporting Actress race, and after seeing the film myself, I must say that I agree. Out of all of the movies and performances I have seen this year, Angela Bassett is clearly the best performance from a supporting actress so far (with only real competition from Jamie Lee Curtis in Everything, Everywhere, All at Once, Nicole Kidman in The Northman, and Nina Hoss in TÁR out of the films I’ve seen so far).

Beyond just the performances, every other aspect of this film is incredible. Ludwig Göransson’s (who won an Oscar and a Grammy for his score for the first film) score for Wakanda Forever is phenomenal, carrying over the African leitmotifs from the original film and bringing new Mesoamerican musical beats for the introduction of Talokan. The soundtrack, now being led by songs from Rihanna and Tems, is also a wonderful sophomore album that plays beautifully alongside Göransson’s score. Ruth Carter (Oscar winning costume designer) returns to Wakanda Forever as continues her jaw-dropping work in costume design. Obviously, Carter’s designs for the hero suits and the Talokan costumes are beautiful and what most people will be walking away praising, but her work on the civilian clothes and the outfits of royalty are also gorgeous: the Best Costume Design race is 100% decided, she is winning for her work in this film. The cinematography by Autumn Durald Arkapaw is phenomenal and rivals 2021’s The Eternals as being Marvel’s most visually stunning film. What wraps everything together is Ryan Coogler’s direction and script. This movie begins and ends in tribute to Chadwick Boseman, and Coogler’s direction and script for the rest of the film is clearly in honor of him as it processes through his, the cast and crew, and our grief.

Black Panther: Wakanda Forever is among Marvel’s triumphs and is a fantastic conclusion to their otherwise filler Phase Four. Phase Four as a whole has been about dealing with the aftermath of Avengers: Endgame (2019) and how our heroes deal with how the world has changed. Wakanda Forever continues this trend by imitating real life. In 2020 we lost an incredible talent way too soon, and now in 2022, Wakanda Forever allows us to come together as the filmgoing public to grieve his loss, celebrate his life, and move forward. With fantastic technical prowess and incredible performances across the entire ensemble, director Ryan Coogler once again delivers a powerful film that belongs in the upper echelon of the MCU and will definitely be remembered as one of the best films of the year.

Black Panther: Wakanda Forever (2022) is rated PG-13 for sequences of strong violence, action and some language.