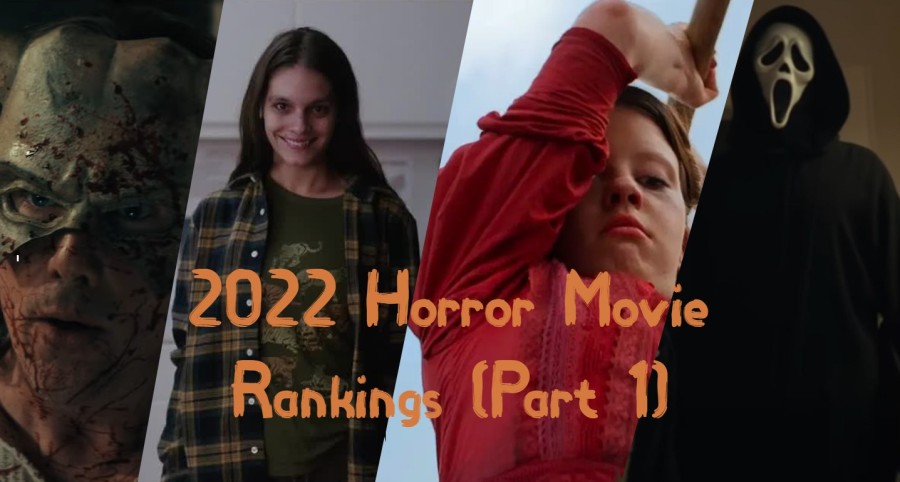 My long hiatus from writing reviews came after last October, where I reviewed a horror film, show, or book everyday within the month. The massive amount of work I put into that, mixed with the increased toxicity towards film reviews (more on that after Black Panther: Wakanda Forever (2022) releases next month), caused me to lose a lot of steam with writing reviews. So, here I am a year later ready to return and talk all things movies, and what better way to start back than ranking the horror films that I’ve seen this year so far. This will be part one of two with this covering thirteen of the horror films I’ve seen so far this year. Part two will be coming on Oct. 30, with all the films that I plan on watching from tonight until then (there are a ton of frights to indulge in this year). So without further ado, here are my rankings and quick reviews of thirteen of 2022’s Halloween offerings.

Stephen King adaptations run a massive gamut in terms of quality. You have films such as The Shawshank Redemption (1994) which are arguably among the best films ever made, and then you have films like The Cell (2016) which are among the worst films ever release. Firestarter is easily one of the worst Stephen King adaptations ever released and is among one of the worst films I have seen in years. With concrete wall-like acting, cheap looking special effects, and a very laborious to get through plot, I would not recommend this film to anyone.

Morbius is one of the many films that was going to release back in 2020 but got pushed back due to the pandemic. What Sony should have done is take the pandemic as an omen towards this film’s quality. Sony’s Spider-Man-less Spidey Universe started off decently strong with the original Venom, but between Let There Be Carnage and now this, I zero excitement for any future Marvel projects coming out of Sony’s live-action Spider-Verse. A messy plot with horrible pacing, inconsistent visuals, mediocre score, and the single worst post-credit scene of all-time, all make up the groan inducing and blood-less vampire movie (?) that isn’t worth your time.

This film is in a very interesting position on this list: I like this movie more than a lot of people do. Bodies, Bodies, Bodies is a fantastic satire of Millennial and Gen Z culture and a great satire of whodunnit, slasher flicks. While I find the film hilarious and a really fun watch, I actually have this so low on this list because it’s not a horror film. From all promotional materials and listings, this is labeled a horror film, but it’s not horror. Even though I think the performances are great, I love the script, and I would recommend this film to just about anyone, the lack of horror in this “horror” film makes me rank it low on this Halloween ranking.

Men is a movie that, despite the mediocre trailers, I was really looking forward to. Writer/director Alex Garland has proven time and again that he is a master at atmospheric storytelling and bringing the best out of his performers, and Men furthers his reputation of great direction of both those filmmaking aspects. However, all the unsettling intrigue and tension is built of an incredibly slow first two acts and concludes in an absurd third act makes the entire film feel disjointed and exhausting. While I walked out of Men thoroughly disturbed, the excruciatingly slow pacing and confusing ending left me feeling disappointed in the experience.

The Scream franchise is one of the many horror franchises that, I believe, are the definition of hit-and-miss. I have really fond memories of the first two films in the franchise, but Scream 3 (2000) and Scream 4 (2011) are truly awful films. Due to this, I went into this newest installment with little expectations, and my lack of enthusiasm led to me be very impressed with this newest entry. While it doesn’t elevate the franchise, I think the incredible cast and the filmmakers leaning into what made the first film great lead Scream (2022) to be one of the best and bloodiest films in the franchise.

I love Jordan Peele. Between Get Out (2017) and Us (2019), Peele has secured his place among the ranks of the horror greats. With his great success with these films, I had great excitement for his newest horror film, Nope. While it has proven to be divisive among fans as to just how great this film is, most people will tell you that it is entertaining as hell. With Keke Palmer and Daniel Kaluuya both giving award worthy performances, the film’s incredible script and beautiful cinematography, and one of the tensest scenes I have ever seen (the barn scene), Nope is by far one of my favorite films of the year so far. The only reason this film isn’t higher on the list is that it doesn’t go full horror—on list ranking horror films, it can’t get that high by just being a sci-fi thriller.

Smile is a film that will be studied in how well it marketed: one of the best, and creepiest marketing campaigns I have ever seen for a film. Fortunately, the marketing did not lead us astray as this movie is incredibly fun. Filled with creepy atmosphere, gruesome imagery, and a truly scary monster, Smile is a perfect film for the Halloween season. However, it’s not without its faults. There is some bad writing here and there, the pacing between the second and third acts grinds to a halt, and the character Joel is insufferably annoying in how he’s written. That said, I would still happily recommend this horror flick to anyone looking for a new fright this spooky season.

Director Ti West is someone that has quietly snuck his way into being a horror mainstay with his many directing credits in the television horror world. I have never been a hug fan, so I wasn’t really looking forward to X (which kind of came out of nowhere). That said, OH MY GOD. I absolutely loved this movie and I think it will become a horror classic. With great set pieces, bloody slasher goodness, and an awesome premise, X is easily my biggest surprise hit of the year. What elevates this movie even higher though, is the phenomenal performance by Mia Goth. He portrayal of both the young protagonist and the elderly villain will be talked about for years to come. I would definitely recommend this movie to fans of the grindhouse slasher subgenre of horror.

The idea of taking the Predator franchise anywhere after the atrocity of Shane Black’s 2018 film, The Predator, was very worrisome to me. However, with an awesome trailer and incredible word of mouth, I decided to give the Hulu original, Prey, a chance, and I am so glad I did. Placing the Predator during the western expansion time period and pitting him against Native Americans and fur traders was a genius decision. Easily my favorite film in the franchise, Prey brings back the thrilling and brutal horror of the original 1987 film while elevating the franchise to new narrative and cinematic heights. My only complaint with this movie is that I didn’t get to see it in theaters.

X did not only surprise with its incredible quality, as it revealed in a credit scene that Ti West reteamed with the incredible Mia Goth to bring a surprise prequel a mere 6 months later. I loved X, so I immediately head out to watch Pearl the moment it hit theaters, and it is even better than the first. Mia Goth gives the performance of a lifetime and delivers one of the best and creepiest monologues I have ever seen. In this demented mix of The Wizard of Oz (1939) and Psycho (1960), Ti West has managed to bring audiences not one, but two phenomenal horror flicks that will undoubtedly be among my favorite horror films of all time. Now I cannot wait for the conclusion to the X trilogy with his MaxXxine releasing (hopefully) next year.

Scott Derrickson is among the names of the best horror directors working today, so when he teams with Blumhouse Productions (one of the best horror production houses working today) I am instantly interested. With Derrickson’s sense of dread and ability to direct intensity and atmosphere, The Black Phone captures fear by grounding it to very real circumstances in child abduction. Fantastic performances from Ethan Hawke, Mason Thames, and Madeleine McGraw lead this grounded supernatural thriller to phenomenal heights and delivers a very satisfying movie experience.

Marvel’s track record with its Phase 4 has been all over the place in terms of quality. With Werewolf By Night being Marvel’s first holiday special for Disney+, I was very worried. I am a massive fan of the Universal Monster movies from the early 1900’s, and this special was a pure love letter to that style of filmmaking. Famous composer, and first time director, Michael Giacchino knocked this out of the park. This may be among my favorite projects that Marvel Studios have ever produced. I love all of these characters, the script and pacing were great, the choreography and practical effects were incredible—everything about this special was an absolute treat. The only reason this is number 2 on my list is because I want to leave room for my recency bias. Werewolf By Night is definitely going to be a Halloween staple for me from here on out, and I desperately hope that Marvel allows Giacchino to further develop monster movies for the studio.

Barbarian is a great example of why movies are meant to be seen with an audience. This film was advertised as “an airbnb experience gone wrong,” but it is so much more. The lead performances are all fantastic, the story is wildly unpredictable, and the cinematography is phenomenal. Director Zach Creggor has created a masterpiece in horror, and no doubt, this movie will be the horror film that everyone talks about from 2022. Filled with twists and turns, dark humor, and a truly terrifying premise, this film is a monstrously entertaining thrill ride. My best suggestion, watch this with a bunch of people and don’t look up anything about the movie—you will not be disappointed.

One thought on “Reviewing and Ranking 2022 Horror Films (Part I)”