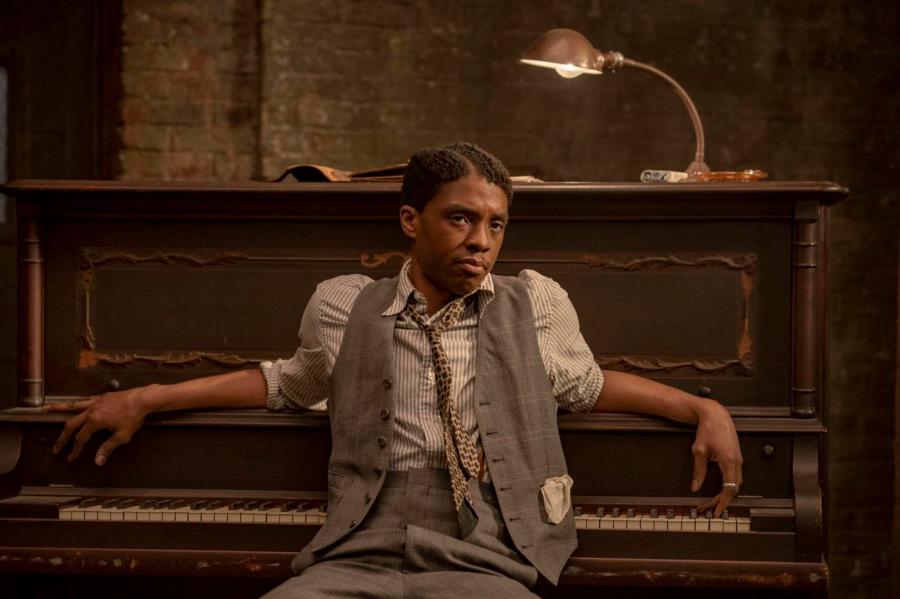 One of the hardest losses in the pop-culture sphere during the mayhem of 2020 was the life of Chadwick Boseman. While he was best known for his role as Marvel’s King T’Challa, the Black Panther, Boseman had a career filled with great performances. For most people, his best performance pre-Panther was his portrayal of Jackie Robinson in 42 (2013), but for me his embodiment of James Brown in Get On Up (2014) was what made me appreciate him as an acting prowess. I was super excited to see him return to a story about music before his passing, and after, I knew it was a must watch. However, this film is about so much more than a recording session. Ma Rainey’s Black Bottom is a brilliant look at characters that have experienced great turmoil and the contrast on how they handle it and the exploitation of the black experience by the white management of that time.

Ma Rainey’s Black Bottom is about a tension filled recording session in 1920’s Chicago. Ma Rainey (played by Viola Davis) is the acclaimed “Mother of the Blues” that drives the most album sales for the white managed recording studio and uses this to demand whatever she wants. Tensions are high as Ma and the management are arguing over who is truly in charge, and the bandmates are in the rehearsal room arguing over what versions of the songs they should play and whether Levee (played by Chadwick Boseman) has what it takes to stand up to the white man and break off the band to make a name for himself. Based on the stage play by Pulitzer Prize winner August Wilson.

The movie offerings this year were slim due to the pandemic, but with great luck, streaming services have brought us many great pieces of programming to supplement the black out of cinemas. Netflix, in particular, has brought many great shows and films, and this addition to the 2020 Netflix lineup rises above. This film is an incredibly different type of film as it emulates the feel of watching a play. Every scene takes place in one of three rooms, all within the same building. This creates an intimate, yet claustrophobic, feel throughout the entire film. As the plot unravels, you feel all the pain, happiness, confusion, and anger that each of the characters have an unique combination of as they share their stories of defeats at the hands of their environments. The director, George C. Wolfe, does an incredible job at showing you the pain and flaws in all the the characters and yet has you rooting for each of them, even when they are opposing each other.

The performances in this film are top-tier across the board, and I would not be surprised if this film receives multiple nominations for the acting categories at the Oscars. Viola Davis is always a powerhouse, no matter what she is in, but she absolutely nails the part of Ma as she nails the ruthless and arrogant, and the pained and scared all within the same facial twitches and line deliveries as she offers a fantastic masterclass in subtlety. Chadwick Boseman as Levee is phenomenal and easily one of, if not, the best performance he has ever given. The way Boseman portrayed the masking of his inner turmoil was incredible. Throughout the beginning of the film, Boseman portrayed a happy-go-lucky musician that was a little too full of himself, but through Boseman’s expressions, you could tell that there was something dark hidden under all of that self-righteousness. When the moment comes where that dark side comes out, Boseman delivers every fiber of being and gives one of the best monologues that I have seen in years. Another performance that I think a lot of people are overlooking is Colman Domingo’s role as Cutler, the band leader. He is the light in the film that keeps everything from falling apart and becoming just a dour sadfest.

This film is a hard sell to convince people to watch because of just how different and dark this film is—it’s an hour and a half that is just dark back and forth dialogue and does not have a happy ending. However, it may be my favorite film in all of the late Chadwick Boseman’s catalogue and has some of the best performances within all of what came out in 2020. This unique way of showing the exploitation of hardships within the black community and the inner turmoil within that community on how to stand up to it is phenomenal and needs to be experienced. I highly recommend this film for both the acting and the incredible story that director George Wolfe delivers. Between this and Pixar’s Soul, I’m happy to say that my 2020 movie experience ended on a high note.